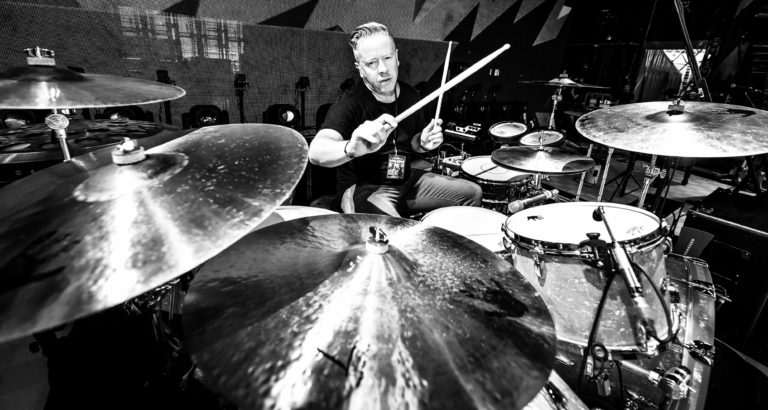 Lucas: So, when you were a kid you were listening to your Walkman and playing along to music and imagining yourself playing in front of thousands of people.  Here we are now many years later and it’s actually happening as a reality with you performing in large arenas around the globe.  That’s a textbook example of visualization.

Karl:  I used to listen to albums in their entirety and as soon as I put the headphones on I was off in that world.  The song order of an album was something people put a lot of thought into back then.  So I used to just play along with the order of the album.  It would be like playing a set.  There was no fast forwarding to your favorite song.  I would play all the ballads and album fillers and do the journey through the entire album.  In my garage I would go from playing Raised on Radio to A Physical Presence to The Little River Band to The Eagles to It Bites to Toto to Fool’s Gold.  I was playing along to these records and staring at some really cheap MDF wood that my dad used to build a drum booth and I would play every day until 6 o’clock.  When I closed my eyes, I was playing with these bands in front of lots of people.  It’s an education playing the whole album, I used to love it.  I highly recommend it now.  Play the ballads man!  Not too many listen to the entire albums anymore, they just listen to single tracks.

Lucas: Another influence that I heard you mention in other interviews is Tears for Fears and Manny Elias who I think is another super underrated drummer because he is so animated in his playing and a colorful drummer. 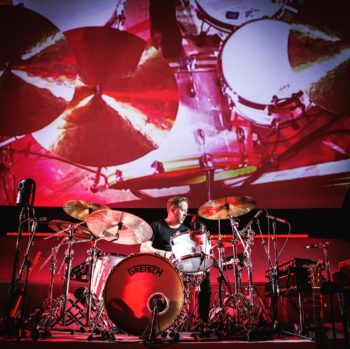 Karl: I was fortunate enough to meet Roland and Kurt in the studio a couple of years ago.  It was only very briefly through my friend who was producing their latest record.  Really lovely guys and I just think they are super talented.  Real forward-thinking songwriters and always a step ahead.

Lucas: Which album of theirs were you mostly into, The Hurting, Songs from the Big Chair, or Seeds of Love?

Karl: Songs from the Big Chair.  I love a lot of 80s stuff.  I’m real big into that type of sound.  That tight, precise playing. That’s why I love the Go West stuff.  When I grew up and finally became a professional drummer I thought to myself, “Alright I’m ready to play 80’s music,” but unfortunately by then it was the Millennium and I was too late.

Lucas: Yeah, and at that time there wasn’t even an 80s revival thing going on yet.  Must have been horrible.

Karl:  It has still been very handy though because a lot of the gigs I do, and some of the stuff in the studio, it’s all about playing tightly with a click.  Being right on the click or playing around the click is really important.

Lucas: I know Omar Hakim talked a lot about playing around the click, about going a little behind the click in the verse, and then jumping a little in front for the chorus.

Karl: It depends on what it is.  Bitty McLean taught me how to play reggae with the click.  On Robbie’s stuff, I tend to pull back a little bit, but if I am doing more poppy stuff like I did with Olly Murs last year and its sequenced with 16th notes and all, you have to be right on it.  It just depends what it is. Pete Ray Biggin, the current drummer for Level 42, he is a great example of taking charge of the click.  We did a clinic tour together and he’s a monster, great groove.  I actually got on his kit and played “Hot Water” on a soundcheck, that was my highlight of the year, thanks Pete!

Lucas: I talk to a lot of backing musicians and the importance of establishing trust with their boss.  Do you feel like you have established the ultimate trust with Robbie Williams after nearly 10 years of being his drummer?

Karl: Without a doubt.  He doesn’t even think about it anymore, because he knows I’m rock solid. 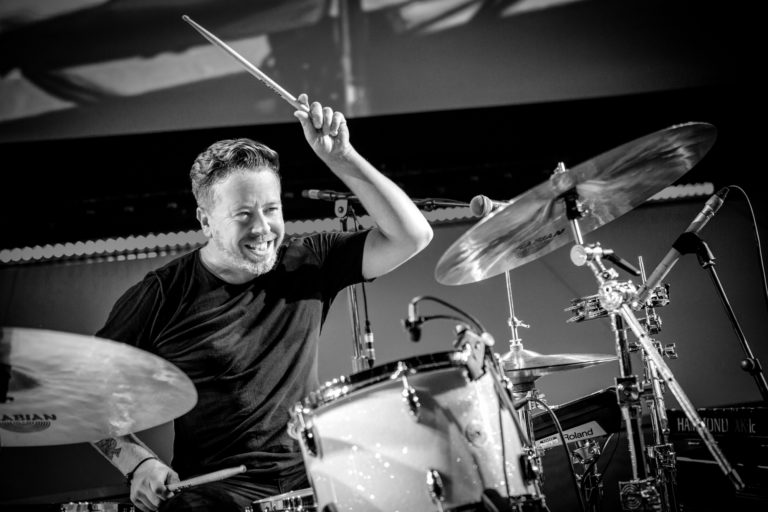 Lucas: How long did it take to establish that level of trust?

Karl: Well, first you have to have the respect of the MD and know that he can trust you when you are in the driving seat, especially with clicks that are moving and tempo mapped.  The big thing with Robbie is watching for endings, because he could be all the way down at the end of the ramp and wave a mic stand to finish or move his hips or something because he has to entertain the audience.  I have to make sure I am there to back him, if he looks for a nod about where we are in the song or needs some kind of interaction, we’ve learned to do that over the years.  Now he knows I am right behind him which is my job.

Lucas: How about with James Blunt?

Karl: Same with James Blunt.  With him there is no click track, the music moves with emotion.  Choruses slow down sometimes.  I just know his body language now so if he wants something kicked up a bit I know the signals.  That stuff develops over the years.  I would definitely say that the artists I work with feel like they can count on me, I guess that’s why I am still doing it.

Karl: Everyone makes mistakes the odd time out.  I pride myself in not making mistakes.  If technology forces an error then there is nothing you can do.  At the level I am playing at you shouldn’t make mistakes. My job is to back the artist and that is what I take pride in doing.  Being expressive and passionate on stage is what I always try my best to do. It’s so important for the artist and band members to feed off each other.

Lucas: Can you talk a little bit about your work with Feeder in the beginning of the 2010s?

Karl: I still have a massive place in my heart for Feeder.  We still record together.  We’ve done quite a few records together.  Renegades was the first album I did with them and then right after that we did Generation Freakshow.  Then in 2016 we did All Bright Electric which I think is my favorite Feeder album because of the sound and the songs, definitely worth checking out.  I did Grant Nicholas’ solo record called York Town Heights which is fantastic, a really, really good album.  A greatest hits just came out called The Best of Feeder and parallel to that we released a new album called Arrow.  So we’ve done a lot of music and some great touring.  My last show with the guys was Isle of Wight festival two years ago where we headlined the second stage. I’ll never forget coming off stage because Fin was with me that night, and we came off at midnight and I was soaked, which I always am.  He put his head on his chair and went “Daddy, that was amazing” and I was so happy that I had impressed my son.  I’m sure we will do some more recording at some point. I miss the guys and loved playing live with them, such a great noise! They now have a great friend of mine on drums (Geoff Holroyde) and are touring Europe and the UK doing the “best of”.  Geoff and I have a mutual love and respect for each other, and he is the right man in my opinion and he’s done a great job for Feeder. 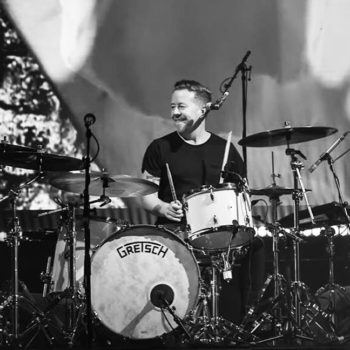 Lucas: So you’re playing with the SPD-SX to access sampled sounds from recordings?

Karl: I am, and sometimes I trigger the 22” kick and the left snare with a DDRUM trigger.  So there are a lot of patch changes going on.

Karl: I play Gretsch drums because I love the vintage sound. Broadkaster has been my favorite kit so far.

Lucas: Have you tried them all?

Karl: Yeah, I have a US custom kit, and I love the projection and the sound.  They sound phenomenal.  They’ve got massive heritage and history.  I feel honored to play a brand that has been around for 135 years, and being associated with the players that have played Gretsch.  I can’t say too much but some of my heroes endorsing other companies always played Gretsch in the studio.  I’ve been with Gretsch now for over 15 years.  I use the US custom kit in the studio a lot, then I have two Broadkaster kits, one I use on tour with James Blunt, and the other I use on tour with Robbie.  With Feeder I’ve used a New Classic. I’ve played them all a lot and they all work in different wonderful ways.  They are just great sounding drums.  You put coated Emperors on those toms and nothing is touching them.  Now I have the 14” kicks and I prefer those because they have that vintage sound.  I’m using a P3 on the 24” for a rock solid sound and a P4 on the 22” for an open sound.  I’ve got no reason to listen to any other drums, and the signature Gretsch sound has become part of my signature sound.

Lucas: Well, on behalf of the Gretsch family, we are happy that you are playing them!

Karl: Well, I can’t thank you all enough. Fred Gretsch is always re-tweeting my stuff so I feel a lot of love and that’s why we have to bring Gretsch Drum Night back together!

Lucas: Aside from doing Gretsch Drum Night what are your plans for 2018?

It’s a lot of diary juggling, I know that for sure.  I’ve been recording with Ed Sheeran again which has been simply fantastic, he is a super talented lad and great to work with. I’ve also been recording with the UK country music sisters Ward Thomas, who have a great new album in the making. I always have a few drum clinics in my diary so check out my website or social media for any future dates. I think that will be enough for 2018!

Make sure to read Part 1 of this 2-part interview.  And check out Karl’s Instagram and Facebook pages.