Karl Brazil is one of those guys who tricks you with his behavior. You meet him for the first time and think he’s just another happy-go-lucky guy with a penchant for English football and 80s pop.

If you had never seen him at his workplace you would assume he was pulling pints at the local pub for a living or maybe a lifeguard at the local swimming pool. Yet below this friendly laid-back demeanor looms a highly disciplined and versatile perfectionist who has mastered his trade. He is a consummate professional who prides himself in making no mistakes behind the drumkit when he’s on the job.

Karl Brazil has struck that perfect balance that you will often find amongst A-list drummers. They are fun to be around in those gloomy 4-hour delays at the airport, but when it comes to laying down the groove, whether on stage or in a recording session, there is no more joking about. It’s this very professionalism and adaptability as a player that has landed him top level gigs with the likes of Robbie Williams, James Blunt, and countless others, making him one of the busiest session drummers in the UK.

We sat down with Karl at the Musikmesse 2018 in Frankfurt, Germany to talk about his one big career rough patch, his love of That Great Gretsch Sound, and much more. 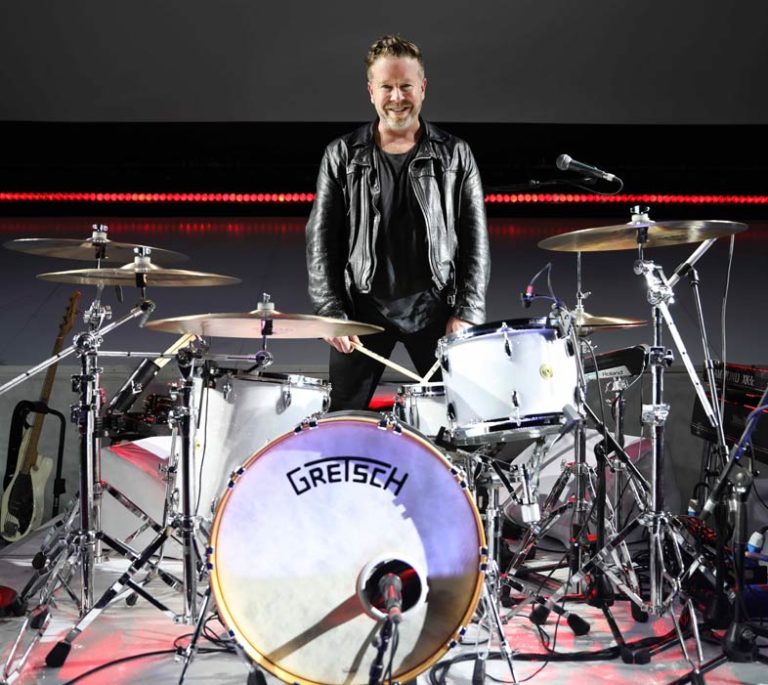 Lucas: You have a son, right?

Karl: I do, I have a son named Fin and he is going to be eight this June. He is a lovely little thing and very forgiving at the moment because I have been away a lot.

Lucas: I talk to a lot of touring professionals who have kids.  Talk a little about that work/family balance.

Karl:  We have a really good understanding.  He lives with his mom. I’ve been away a lot this year but he is at the age now where he knows what his daddy does for a living.  He understands that he has a nice little set up in life.  He is very happy-go-lucky like me.  My dad was away a lot when I was young.  That doesn’t mean that my son should understand it, but with having the use of FaceTime there’s no excuse for not seeing each other and making his little brain realize that you actually are not too far away. He counts the weeks until the end of my tours and on this last one I told him there was still a week left on the tour on FaceTime, and then I showed up at his football match that very same day to surprise him.  I’m taking time off in July because he is on school holidays.  My lifestyle isn’t normal but I’m not going off to fight in the Army so it could be a lot more difficult.  I involve him a lot and he comes to plenty of gigs, school permitting.  Finlay has a great hands-on mom and grandparents who all run him around to his different activities which include trumpet and piano lessons, he is not so much into the drums yet though.  When people ask him what instrument he plays he feels a lot of pressure to say that he plays the drums. It’s a shame he doesn’t play because we could get him a lovely drum set, but he seems very happy with his piano for now.  He’s doing great in school; loves his football.  His grandparents are all still there and all love him.  So he has plenty of people around him.  I’m very proud of him. 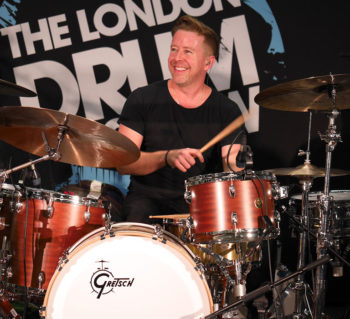 Lucas: So, growing up, who were your influences?

Karl: I hate putting them on a list because it changes over time.  There are so many great drummers around who come to your attention at different stages of your life.  When I was growing up my own father had a great record player at the house, and Jeff Porcaro’s work got played a lot, whether it was with Toto, Fools Gold, or Steely Dan, he was the drummer that I listened to a lot.

Lucas: OK, but I also heard you mention Phil Gould of Level 42 as an influence, and he is also one of my favorite guys.  I love that you mention him because his playing is amazing yet he rarely comes up when folks talk about major influences.  Obviously with Level 42 Live and Running in the Family and all that he was a huge superstar, but to younger kids today he is perhaps less known.

Karl:  I know what you mean.  Me and Garry Wallis were having dinner last night at this Remo event and we ended up tapping out some of Phil Gould’s drum fills on the dinner table.

Lucas: Which Level 42 album was it that drew you into Phil Gould?

Karl: Their live album A Physical Presence from 1985 but also their earlier hits like Hot Water and The Chinese Way.  The fill I played on the table last night was from Leaving Me Now.  His fills, like Jeff Porcaro’s, are just really well thought out, very musical, and very well put together.  His playing is also so laid back with the open style, left hand on the high hat.  I’m left-handed and I can play like that but it’s easier for me to cross over.  Watching Phil on that Live at Wembley performance, it’s almost like he was bouncing around the kit, I’d love to see Phil on the dance floor, I reckon he can move.  He just did things that made me excited about drumming, like when he goes into the chorus of Hot Water, he would end the fill with a quick snap open to close on the high hat instead of just hitting the crash.  It’s all about taste and feel with Phil Gould and I always know his playing if I hear it.  He’s a very musical guy. 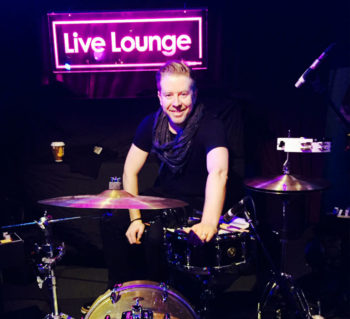 Other influences would be Jeff Porcaro, Mickey Curry, I also love Phil Rudd from AC/DC.  Another feel guy, again.  I don’t know how he smokes cigarettes and plays at the same time but good work. My father Peter is Irish and introduced me to Celtic music and there’s a band called Stockton’s Wing and a drummer called Fran Breen.  They are this Celtic fusion funky band with a fiddle, banjo, flute, bass, keys, guitar, and Fran Breen on drums.  I’d seen this guy play when I was a little kid.  He had a remarkable expression and feel, and a personality that I admire.  He went on to play with Nanci Griffith and also played on the Commitments soundtrack album on tracks like “Mustang Sally” and “Take Me to the River” with that beautiful snare drum, which I will own one day apparently, he said he was going to give that to me. I’m holding him to that….

Lucas: When I look at your own career now, and what you have achieved and the projects you are working on today, you are really this high-flying drummer.  Were there ever any rough patches in your career?

Karl:  When I was 17 I was working in a drum shop and the shop manager Gary Chapman offered me an audition with reggae artist Bitty McLean on my day off.  I actually got that gig and came back to the shop the next day with a couple of bottles of wine for Gary.  That was the gig that really ignited my career. 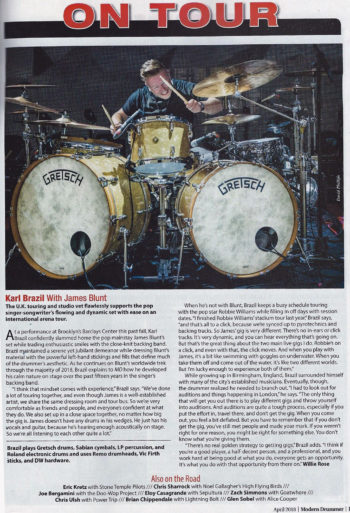 Lucas: Didn’t you play in Top of the Pops with Bitty McLean?

Karl: I did, that was in 1994 and I got into a little bit of trouble for that because I was very young and I didn’t know how endorsement deals worked and I played on a Yamaha electronic kit and I had just signed a deal with Pearl.  I also had a ponytail in that performance and my seven-year-old son Fin tells me now that it looked ridiculous!  We then toured the UK with Wet Wet Wet in 1995 and we were playing large venues and I was like “Whoa, is this what it’s like?!”  When that all stopped, and Bitty had a rest, I sat around thinking and wondering how I could get back on tour again with a major act.  Things were a bit quiet, so I had to find local things to do in Birmingham, and I didn’t have a driver’s license at the time either.  A few auditions popped up in London, including one for Robbie Williams which I went to but didn’t get.

Lucas: Why didn’t you get it? Was it your timing or your playing?

Karl: I think I played OK but I was just too young for the gig.  Robbie’s bandmates were a lot older than me at that time and I think it was just too early in my career to be honest.  There were also a lot of drummers auditioning for the gig that day. At that audition though Guy Chambers took my details and called me again for other sessions, and when I got a bit older and the opening came around again, it all fitted together nicely.  I always advise young aspiring drummers today to never turn down auditions because even if it’s not for you, you might meet people there that will remember you later for something else.

Lucas: So were you living with your parents after the Bitty McLean tour?

Yeah, and I remember driving my dad nuts at that time. I was back home living with mom and dad and I asked my dad what I should do and he was like “what do you want ME to do?” I went back to work at the music shop for a bit and started playing around town with Birmingham’s Ruby Turner and Trevor Burton.  It was a great Birmingham scene and I had lots of fun, but I needed to get down to London where the new pop stuff was happening if I wanted to get back on a major tour.  So I auditioned for a few things and I ended up touring with the winner of Pop Idol (Darius Danesh) and after that some sessions and other tours came about thanks to some very influential people.

Lucas: How do you get to be doing what you’re doing?

Lucas: There is a lot you can’t control so you just have to push on every front.

Karl: Absolutely. Who knows what I’ll be doing two years from now?

Lucas: Yeah you could end up back at your folk’s house…

Karl: I promise you, I won’t do that to them! 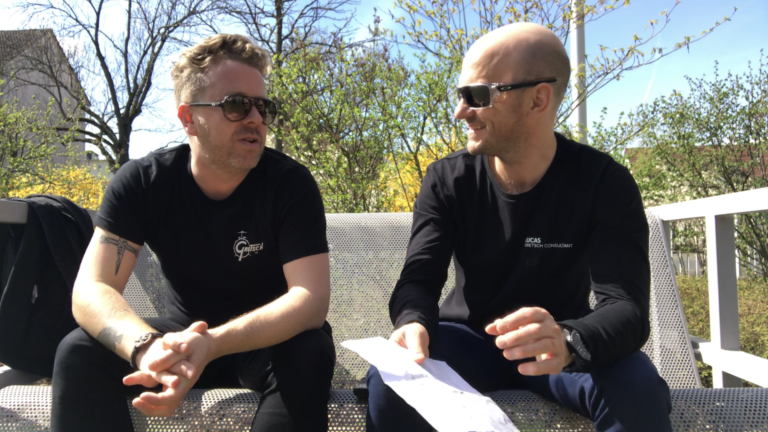 Stay tuned for Part 2 of this exclusive interview coming soon!