It’s a warm summer day in 1947 at the Gretsch Building #4 in Brooklyn.  The young up-and-coming drummer Louie Bellson starts placing wild demands on Gretsch drum production manager Bill Hagner.  You see Louie has this crazy idea to play a drumset with two bass drums, one for each foot, with a huge floor tom in the middle. Not only that, he wants his drumset to actually glow when the lights go dark on stage. All this to help Louie make a big impression at his new gig with Tommy Dorsey’s band at the Paramount Theater.

Never one to back down from a production challenge, Bill Hagner managed to get his hands on some phosphorescent material that could be sprayed on the drums. Back then the spray booths for drums and guitars at Gretsch Building #4 were in the same room, but that shouldn’t be a problem. Bill sprayed Louie’s kit with this white stuff and left it to dry overnight. ”When we came in the next morning,” Bill explains in a 2012 interview,” . . . what we saw was unbelievable. The stuff had floated all over the room.  It covered the walls, the ceilings, everywhere – including six or eight racks of guitars. We had to do them all over again.” Nevertheless, several nights later Gretsch made drum history with Louie Bellson by introducing to the world the first kit with a double bass drum . . . and not only that, it glowed in the dark! 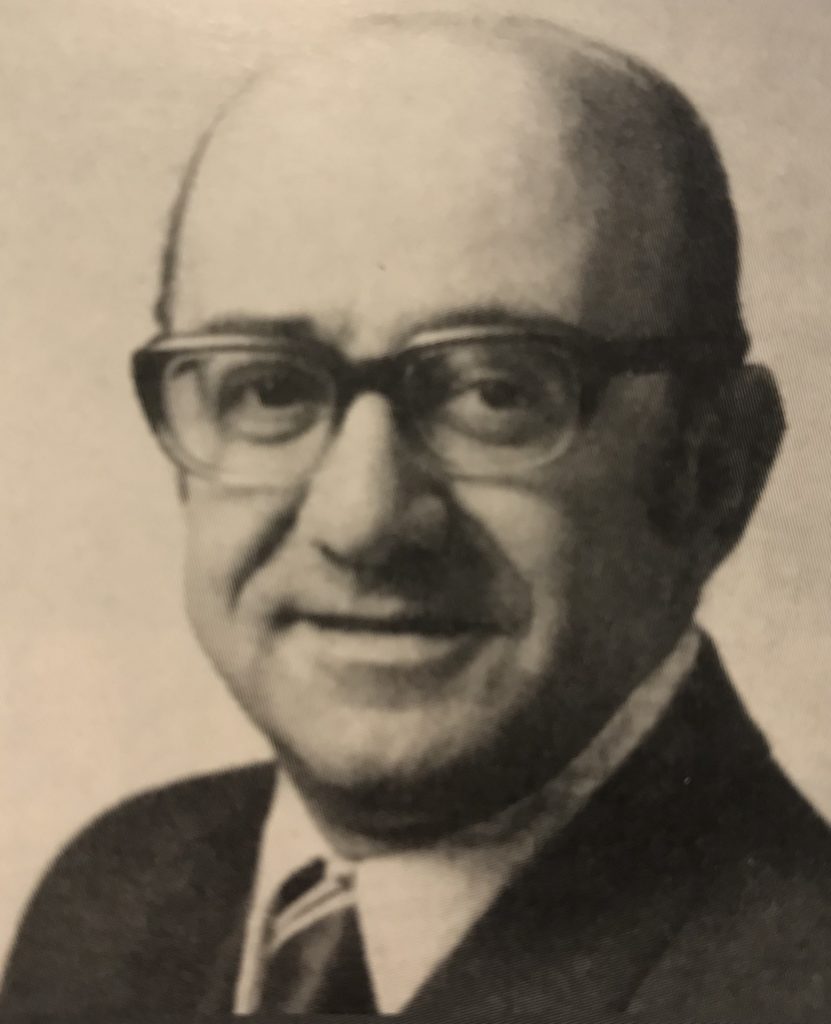 Together with Phil Grant, Bill Hagner continued to deliver his absolute A-game as he spearheaded production of Gretsch drums through the hard bop era of the 1950s and early 1960s.  Progressive jazz kits in cadillac green, champagne sparkle and gold satin flame were all the rage. But whatever the finish, the drums from this era are still regarded today as some of the greatest-sounding drums ever made.

There really have only been a handful of truly great production workers at Gretsch Drums throughout our 136-year history–people like Richard Dickson, Bill Hagner, or Gene Haugh. People who had a natural talent for the craft and could help Gretsch transition through multiple eras of Gretsch drum production. They committed their entire careers and lives to upholding ”That Great Gretsch Sound.”

Today Gretsch can easily begin to add current Director of Operations Paul Cooper to this list of seminal drum builders. Paul was responsible for massively scaling up production in the early 2000s as Gretsch partnered with Kaman Music which put Gretsch drums in almost every music shop in the US and Europe.  Furthermore, Paul is responsible for introducing the Brooklyn series in 2012 and the Broadkaster series in 2014 which further established Gretsch as a dominant player on the global drum market.  But perhaps what is most exciting about Paul Cooper is that he is not done yet. Every year we look forward to seeing what he and his R&D come up with as they find that delicate balance between evolution and tradition. We caught up with Paul to ask him about his career with Gretsch, his playing career, and of course, what exactly IS in that magic silver sealer. 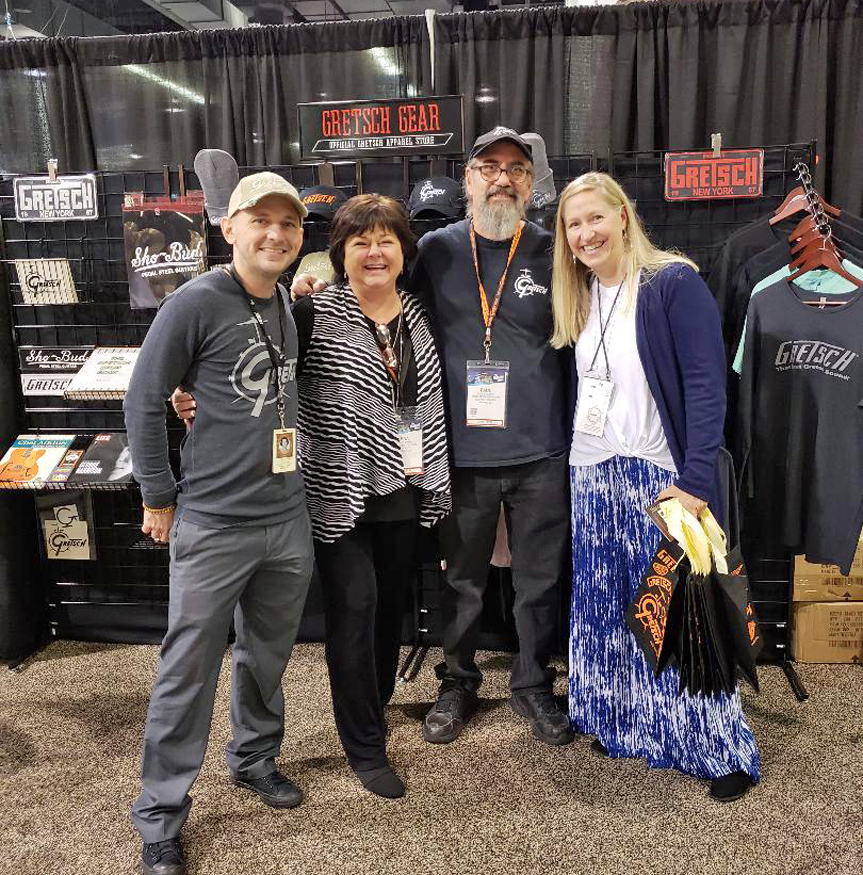 Lucas: How long have you been the Production Manager at Gretsch Drums?

Paul: I actually started with Gretsch in 1998, and I came to the factory in 1999.  It was in September 1999 that I started managing production.  Then in 2012 I got promoted actually to the job of Director of Operations and have been doing that ever since.

Lucas: How has the production process changed since you have been with Gretsch?

Lucas: When you see footage of other drum companies with hi-tech equipment and automated machinery, that isn’t something that interests you?

Paul: Well, we don’t really have any hi-tech equipment here at all because we try to adhere to the processes from the 60s. A lot of other companies use a lot of high-end stuff and I think that’s awesome, and I totally respect that, but our whole deal is trying to do most of it by hand. 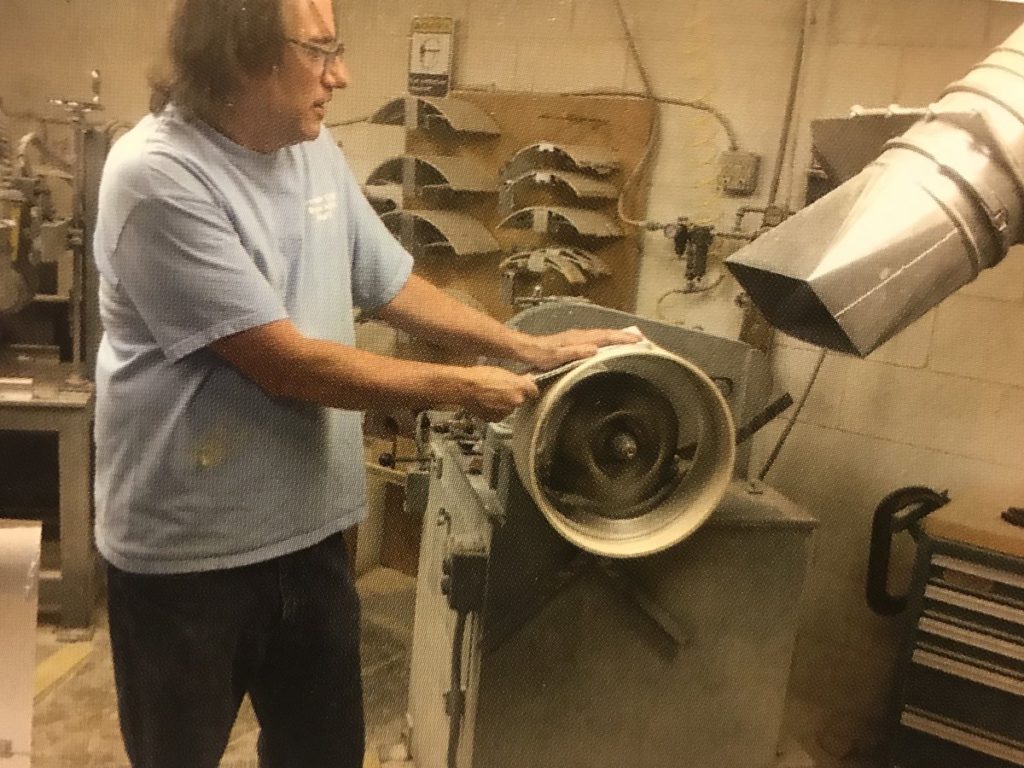 Lucas:  So how many days does it take to make a Gretsch drum from start to finish?

Paul: Well that really depends what finish is on the drum.  A gloss lacquer drum typically will take anywhere from four to five weeks to get through the process.

Lucas: What’s your favorite part of the production process?

Paul:  Probably buffing, but I am getting a little bit too old to do that anymore.

Lucas: Let’s talk a little bit about the silver sealer.  Are you able to reveal what the ingredients are?

Paul:  A lot of people wonder about what the silver sealer is made of, and it has been kind of a secret sauce over the years, but in reality I’m not going to tell you where we get our silver sealer or what type of paint it is just because it’s kind of a proprietary thing.  But it does have a lot to do with the Gretsch sound.

Paul: Yeah that’s all I’m gonna say on that one. 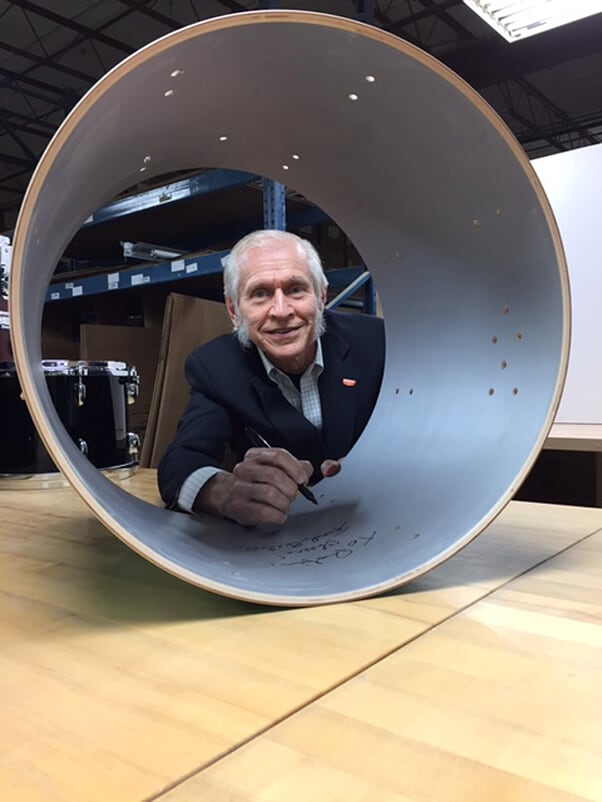 Lucas: Let’s talk about the Broadkaster series.  You came up with that. Can you talk about how that was developed?

Paul: Yeah about nine years ago, I bought a used 1947 Gretsch Broadkaster kit on eBay for $900. The drumset was basically destroyed. It had a bunch of water damage.  I brought it up to the factory and worked on it for about two or three months.  After I got it back together I set it up in my house in my living room.  The first time I hit it, my wife Amy came running in from the other room saying how great that drumset sounded. That pretty much told me that they sounded amazing, so I really wanted to go after that.  It took close to a year to get the shell right and really develop the drumset itself.  Once we got there, it’s like, you know, buying a brand new 60-year-old drumset sound-wise.  It’s not the exact same shell set-up as they made back in the day, because they just don’t make shells like that anymore, but it is as close to it as we could get and they seem to work pretty well.

Lucas: Who is your number two guy in the factory and can you talk about this person and their various roles?

Paul: Josh Safer is my number two guy.  Josh started at Gretsch on my birthday in 2003 and over the years I just kept pawning stuff off on Josh. With every year there would be more and more stuff that I’d pawn off on him.  At this point Josh is actually the Production Manager.  He’s responsible for scheduling the production, making sure all the drums get built in a timely manner. He is really running things out on the factory floor.

Lucas: How many people work in the Gretsch Drum factory and who has been there the longest? 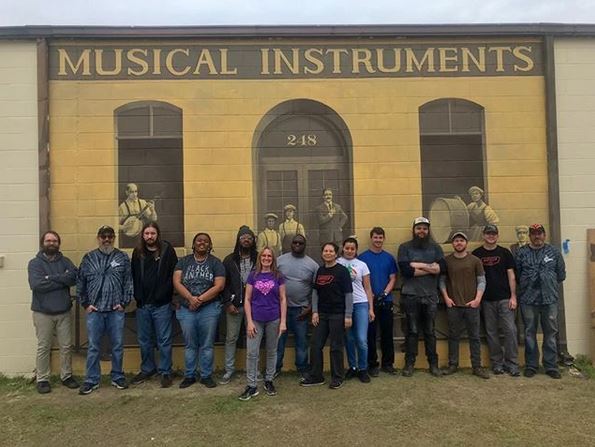 Members of the Gretsch Drums team in front of a new mural painted on the drum factory building.

Lucas: Are people allowed to come to the factory and take a tour or is that reserved for the rockstars and industry insiders?

Paul: We are pretty liberal these days with tours, as long as somebody contacts us through the proper channels.  Either through their Gretsch dealer or the salespeople at Gretsch Drums (DW), we’d be more than happy to give them a tour. 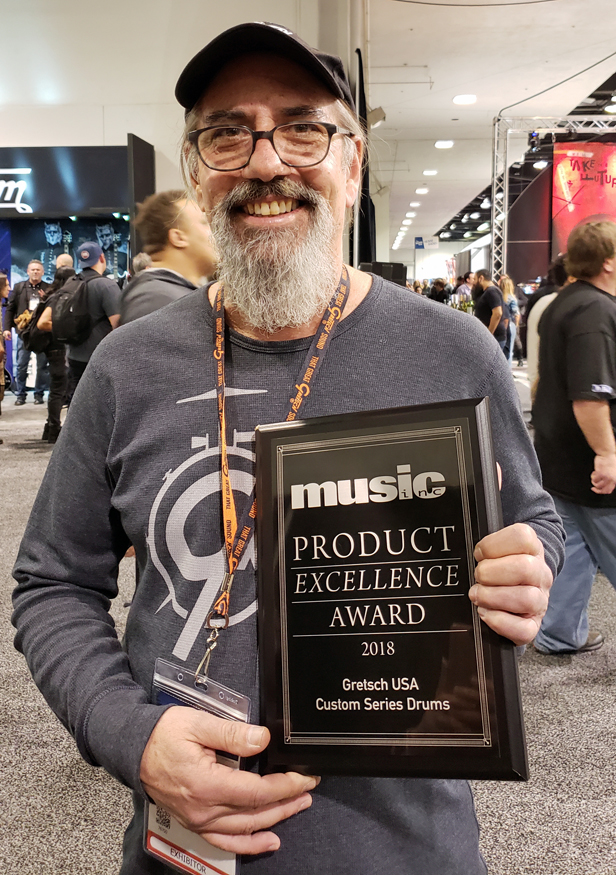 Lucas: When I worked at the factory we had an area where we kept all the mis-drilled drums and defective drums.  We called it the Vinyard because Vinnie would always visit the factory and love hanging out looking at and playing these drums.  Does it still exist?

Paul:  The Vinyard still exists. There are a bunch of shells back in one of Mr. Gretsch’s warehouses.  We really don’t do much with that, we concentrate on building new product and that’s really our primary focus at this time.

Lucas: Do you ever feel overwhelmed by being located in the coastal South Carolina with all the hurricanes and extreme heat in the summer?

Paul: Well there are challenges with the weather obviously.  In July and August here it’s very hot.  Everyone has shorts and t-shirts on and we have fans everywhere and it is still hot.  During the winter it does get chilly.  There are also production challenges related to the weather.  It can affect how long it takes for the lacquer to dry, the humidity, and all that.  We have had some experiences with hurricanes here.  Closures and things like that.  There is not much you can do about that other than just deal with it.

Lucas: So what about you and your drumming career, do you still play?

Paul: I still play all of the time. 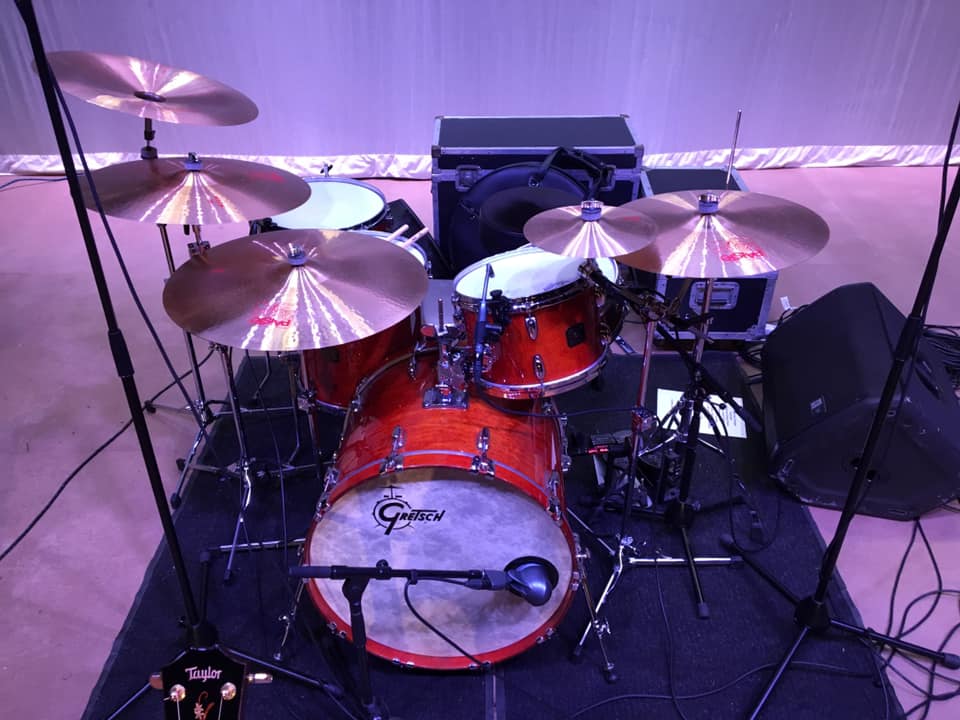 Lucas: Do you ever try out new product that you are experimenting with in a gig?

Paul: Oh, absolutely. I’m still stuck playing my favorite drumset which is my burnt orange kit, and I play it all the time.  Quite often if we are developing something I might take it out for a test drive or I’ll get another drummer here to take it out and play it live since we have a bunch of drummers here.

Lucas: Well on behalf of the Gretsch family thank you for all you do for Gretsch drums.

RT @Juppelbow: Today’s set up for lessons and a bit of recording......@gretschdrums @ZildjianCompany @vicfirth @dwdrums @ProRacketCases @Ro…
Gretsch Drums (5 hours ago)
#repost • @mileyondrumz New video up on YouTube. I’m honing in my video editing skillz (very amateur! But having… https://t.co/Ej4Ehz0XG4
Gretsch Drums (6 hours ago)
. @DrumChannel is giving away 1000 Memberships! Drum Channel has always, and will always, be there for our drumming… https://t.co/YKpyXbmrUy
Gretsch Drums (Yesterday)
Your subscription could not be saved. Please try again.
Your subscription has been successful.