Tarzan, great neighbors, and how a classic logo was created sixty years ago… 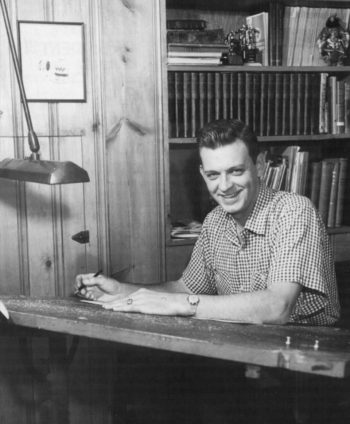 In October of 1955, a family of three moved into a house on Whistler Road, in the village of Munsey Park in Manhasset, New York. The Lubbers family (pronounced Loobers) consisted of Bob, his wife Grace, and their two-year-old daughter, Wendy.

It was ironic that a community with streets named after American artists now had one of the most famous comic book artists of the day living there. Bob Lubbers was a master illustrator and cartoonist for nationally syndicated comic strips such as Tarzan, L’il Abner, Secret Agent X-9, The Saint, Long Sam, Robin Malone, the WINGS comic book series, and many more.

Bob was a witty, likeable, good-natured guy who made creating art and storylines—and even crossword puzzles—look easy and effortless. He was also gifted musically. “My dad could play any instrument he picked up,” says daughter Wendy Lubbers. “He was a great trombone player—and even had an opportunity to play with the Tommy Dorsey Band. Eventually, he had to choose between going into music or going into art. It was a tough choice for him. Ultimately, he picked art, but he loved music all his life. He played the trombone up until he was ninety.” (Bob passed away in 2017, at the age of ninety-five.)

Soon after settling into their new home, the Lubbers met their neighbors across the street: Gretsch Company president Fred Gretsch Jr., his wife Helen, and their two-year-old daughter, whom they nicknamed “Happy.” The two families started spending time together and Wendy and Happy quickly became best friends. Even today, the two childhood friends still stay in touch. And Wendy lovingly refers to her former across-the-street neighbors as “Uncle” Fred and “Aunt” Helen.

Bob Lubbers and Fred Gretsch Jr. shared several things that led to their close friendship. Both had families that had originated in Germany, both enjoyed playing golf, and both had a musical connection. Bob had a deep passion for music and had played in a big band, while Fred’s company manufactured musical instruments. “Music was a definite bond between them,” says Wendy.

That bond led to yet another connection between the two men—a business one, this time. Bob Lubbers was a very successful commercial illustrator. And Fred Gretsch Jr. wanted a new logo for Gretsch drums.

Wendy Lubbers doesn’t know exactly how the now-famous Gretsch drum logo originated. But she speculates that Fred Jr.—knowing how creative her dad was, and seeing the many logos he had designed for local small businesses and schools—approached Bob about creating a new Gretsch drum logo. “My dad was as big-hearted as he was talented,” says Wendy. “He did a lot of free artwork and logos for his friends. I’m sure he jumped at the chance to work on something that was music related—especially for Uncle Fred and for Gretsch drums.”

The logo that Bob Lubbers created for his neighbor sixty years ago was unique. While most drum logos of the era featured the manufacturer’s name in a scripted type font, Bob took a completely different approach. “It’s one of the most distinctive logos in the drum industry,” says Andrew Shreve, who currently serves as Brand and Artist Relations Manager for Gretsch Drums. “Its design says it all: The company name and what the company actually does.”

Bob’s design incorporated a stylized bass drum with a mounted cymbal, cowbell, and woodblock. A bold, italic hand-drawn GRETSCH (with a “drop-G” descending below the bass drum) balances out the drum art and gives the logo a sense of energy and movement. It was a brilliant design that captured the vibe of the hip jazz scene that defined New York City in the 1950s. This was an era when Gretsch drums were the brand of choice for jazz greats such as Elvin Jones, Max Roach, Art Blakey, “Philly” Joe Jones, and Mel Lewis. No wonder Fred Gretsch Jr. loved his neighbor’s new logo design. 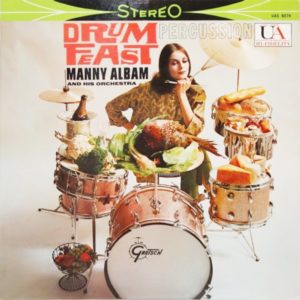 Wendy Lubbers still has her dad’s original logo art and she shared a photograph of it for this article. It’s a priceless piece of music history from an era when talented artists created art and lettering by hand. Bob used a compass to draw the circular bass drum, but everything else was drawn by hand and finished in black ink. You can also see how whiteout and a fine brush were used to harden the edges of the type and touch up the cymbal and bass drum spurs.

It’s difficult to pinpoint the date when the Gretsch Company first started using their new drum logo. I reached out to several Gretsch drum gurus, and they suggested that it was introduced in 1958 or early 1959. The new logo first appeared on the cover of Manny Albam & His Orchestra’s 1959 Drum Feast LP. There’s also a terrific, rare black and white video of Art Blakey performing in1959, with the new logo visible on his sparkly Gretsch drum set.

But probably the most famous depiction of the Gretsch drum logo is on the cover of the Rolling Stones’ classic 1970 live LP, Get Yer Ya-Ya’s Out! The photo—taken on an airport runway—shows Stones’ drummer Charlie Watts jumping in the air holding two guitars, with his Gretsch bass drum (and a floor tom and another guitar) tied to a donkey beside him. (Hey, it was the ’70s.) 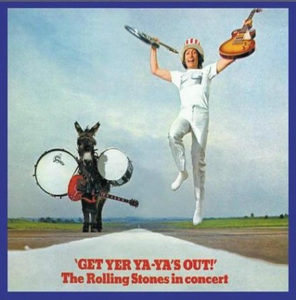 More than sixty years after it was created, the iconic Gretsch drum logo remains unchanged. It’s currently used on almost every marketing piece, as well as on Gretsch USA Custom, Brooklyn, Renown, Catalina, and Energy series bass drum heads. “I get a strong feeling of pride when I see this logo on drum kits,” says Andrew Shreve. “I think of the legendary icons who played Gretsch drums, and of the current artists who follow in their footsteps. It also makes me think of the long history and lineage of the brand itself, and of the Gretsch family history—from Fred and Dinah Gretsch today, all the way back to our founder Friedrich Gretsch. And, of course, I think of the USA Custom factory in Ridgeland, South Carolina, which is the heart and soul of Gretsch drums.”

Reflecting on her dad’s handiwork, Wendy Lubbers says, “I think dad would be thrilled that his design has stood the test of time. I admit that when I see a drum kit, I look for that logo—and I giggle inside when I see it. I love it because of its simplicity, and how it just seems to flow along with the music. It also reminds me of Fred Gretsch, Jr.: strong yet friendly, with just a hint of whimsy.”

Andrew Shreve concludes, saying, “I’d describe the Gretsch drum logo as a vintage design that is truly timeless. It doesn’t have a “shelf life.” A hundred years from now, that logo will still be used and widely accepted in the marketplace.” 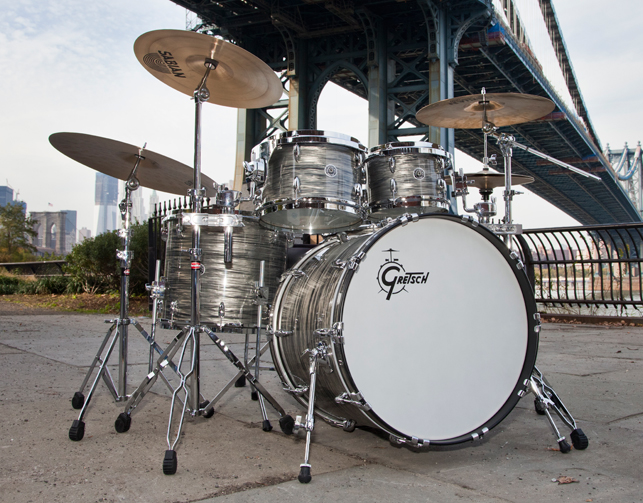 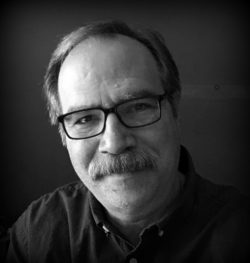 Ron Denny is a freelance copywriter, brand strategist, and a lover of music and music history. He has contributed stories like this to the Gretsch Company for more than 20 years. Ron and his twin brother, Don, also created the Gretsch 135th Anniversary logo, House Telegram newsletter, and Gretsch history poster.