On the passing of D. J. Fontana | Gretsch Drums
Skip to main content

MY CART
Home » Blogs » On the passing of D. J. Fontana

On the passing of D. J. Fontana

Along with the rest of the music world, everyone at Gretsch is saddened by the passing of Dominic Joseph “D.J.” Fontana this past Wednesday, June 13. But we also want to celebrate two wonderful things about D.J.

First, there’s the contribution that this legendary drummer made to the establishment of a new musical style in the early 1950s: a style called “Rock & Roll.” And second is the fact that he made that contribution on a Gretsch drumkit.

It all started in 1954, when D.J. was the house drummer on a country music program called The Louisiana Hayride. An up-and-coming performer named Elvis Presley was booked to play on the program with his backup musicians, Scotty Moore (guitar) and Bill Black (bass). They invited D.J. to accompany them for Elvis’s hit song, “That’s All Right Mama,” which had originally been recorded without drums. D.J.’s solid backbeat added a visceral element to the tune, helping to establish Elvis’s “new sound.”

Elvis immediately invited D.J. to join his group. Remember, this was in the early 1950s, when most country and bluegrass acts were opposed to the use of drums at all. So just having D.J. in the band was a revolutionary step—one that helped to launch Elvis’s career as “The King of Rock & Roll.”

Now, as to the Gretsch drum connection:  On an early tour in 1956, Elvis was playing at a club in Pasadena, Texas. For reasons now lost to history, he wanted to buy D.J. a new drum set to use on the tour. He heard about a jazz and big-band drummer by the name of Herb Brochstein, who had a drum shop in nearby Houston. So Elvis came to visit Herb’s shop, which was located in part of his home. According to Herb’s daughter, Bari Brochstein-Ruggeri, “Elvis didn’t like any of the sets Dad had on display in the shop area, but he noticed a Gretsch set in the dining room.”

The kit that Elvis noticed was Herb’s personal drum set. It was less than a year old at the time, and Herb was understandably reluctant to part with it. But after some serious dickering, he said he’d sell it to Elvis for $500 (which was no small amount in 1956).

Bari Brochstein-Ruggeri continues, “Elvis paid Dad—in cash—and took the drums. A couple of months later, Dad opened up a copy of Life magazine. The centerfold picture was Elvis, D.J., and the band on the Ed Sullivan Show—featuring Dad’s old drum set, complete with its unshaven calfskin head on the front of the bass drum.”

That drumkit came to be identified with early Elvis performances—and, in turn, with D. J. Fontana’s personal playing style. It’s a classic four-piece round-badge set with a copper color nitron finish, sometimes referred to as Copper Mist, and the aforementioned distinctive unshaven calfskin front bass head with the hair still on its surface.  The snare drum was 5 ½” x 14″, the single mounted tom was 8″ x 12″, the floor tom was 14″ x 14″ and the bass drum was 14″ x 20″. This four-piece configuration was a popular combination for the smaller drums produced by Gretsch. The sizes were developed for the jazz players on whom Gretsch focused their principal marketing efforts at the time. So it’s not surprising that Herb Brochstein would have such a kit, since he was a jazz and big-band player. But those same kits would also go on to serve the early rock drummers, as D.J.’s playing on his Gretsch kit clearly demonstrated.

Even after he ceased using that Gretsch set to perform, D.J. kept it as a souvenir of his early career with Elvis. He retained all the original pieces except the 14″ x 14″ floor tom, which was replaced with a 16″ x 16″ when the original was stolen. Nashville-based session percussionist and drum restoration specialist Sam Bacco refurbished the set around July of 2000.

It’s impossible to overstate the influence that D.J. Fontana’s playing had on today’s drummers. He injected early rockabilly energy into country swing, added the creativity of big band music, and propelled it all with a simple but dynamic backbeat that quite literally laid the foundation for everything we know as “rock” today.

In 2006, Rolling Stone name D.J. as number 14 in their “Top 100 Drummers of All Time.” In their commentary they said, “On hundreds of early Elvis Presley recordings, Dominic Joseph ‘D.J.’ Fontana was the cutting edge of rock & roll­ drumming. He pioneered a litany of oft-imitated licks from the jumpy snare hits of ‘Blue Suede Shoes’ to the waves of punchlines that made ‘Hound Dog’ howl.” 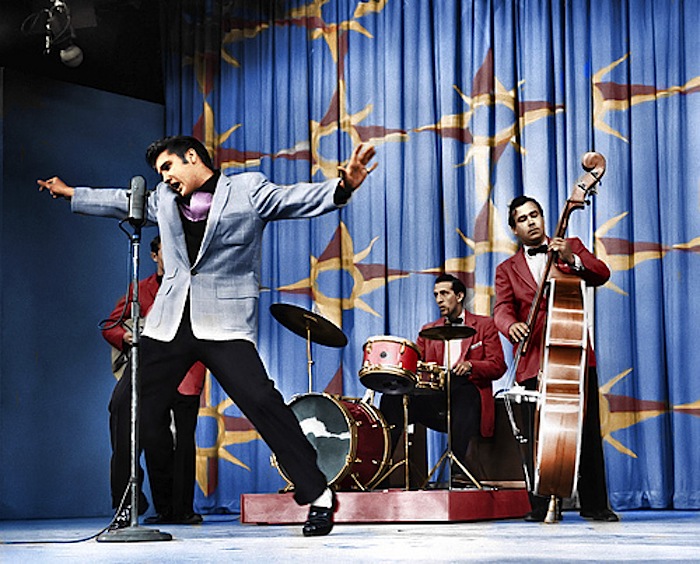 The magazine went on to quote no less a drummer (and Great Gretsch Artist) Levon Helm as saying “He had incredible technique and fast hands, so he could deploy those Buddy Rich press rolls whenever he wanted to. He played like a big-band drummer — full throttle. Now Elvis had a real foundation, and he made the most of it. D.J. set Elvis free.”

He also set generations of drummers who followed free. And we’re proud that he did it on Gretsch drums.

As a footnote to this story: A year after selling his Gretsch drumkit to Elvis in 1956, Houston drum retailer Herb Brochstein went on to found Pro-Mark Drumsticks, which became one of the most successful stick manufacturers in history.

Because he lived in Houston, and the Drum Festival was in New Jersey, Herb needed a drumkit to perform on. Fortunately, Rick Van Horn, who was at that time the senior editor of Modern Drummer and the coordinator of the Festival, had the perfect kit available. So Herb proudly played on Rick’s four-piece, champagne sparkle 1965 round-badge Gretsch kit! Here’s that performance: