The oldest child of Friedrich and Rosa Gretsch (and the first to be officially named Frederick) was only a teenager when his family received the shocking news of his father’s unexpected death while visiting family in Germany in 1895. Overnight, the 15-year-old went from being a high school student to the Gretsch Company’s “New CEO in knickers.”

Fred Sr. was no stranger to his family’s business, having grown up doing small jobs around the shop on Saturdays and learning the musical instrument manufacturing business firsthand from his father. It’s also important to note that Fred Sr.’s mother, Rosa, assisted him and played a vital and visible role during this critical period of transition. Another influence to Fred Sr. at this time was Jacob Hyman, a retired, prominent, and well-connected businessman who had recently become a boarder in the Gretsch home. Hyman became close to the seven Gretsch children; teaching them not only how to succeed in business, but sharing his love of the outdoors, especially fishing. 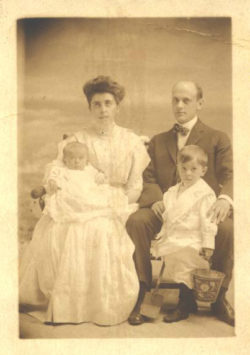 With a combination of smart business skills, youthful enthusiasm, and a bold vision for the future, Fred Sr. started growing the Gretsch Company from its modest beginnings into the largest musical instruments manufacturer in the United States. A 1902 article in the Music Trade Review describes how “the large Gretsch factory at 104 South Fourth Street is doing a flourishing trade with the success of their Rex line of banjos, mandolins, and guitars, and expects a 25% increase in business for the year.” The article also describes the 22-year-old Fred Gretsch as a “young, hustling, up-to-date business man” and mentions that his brother, Walter, was in Boston representing the company on a sales trip.

In 1904, Fred Sr. married Charlotte Sommer in a small ceremony at Charlotte’s parent’s home in New York City. The newlyweds most likely sailed to Europe on a trip that was part honeymoon and part business. Annual musical instrument buying trips to Europe with her husband became part of Charlotte’s life. Over the next four years, Fred and Charlotte would welcome three boys into the world: Fred Jr., William (Bill), and Richard (Dick).

By 1912, the Gretsch Catalog had expanded to include 184 pages and offered thousands of musical instruments and merchandise options. In 1915, Fred Sr. led the construction of his biggest vision to date: the iconic ten-story Gretsch Building at 60 Broadway in Brooklyn. At a cost of over $600,000, the Gretsch Building was quite a statement about the growing future of the Gretsch Company and the Williamsburg manufacturing area of Brooklyn. 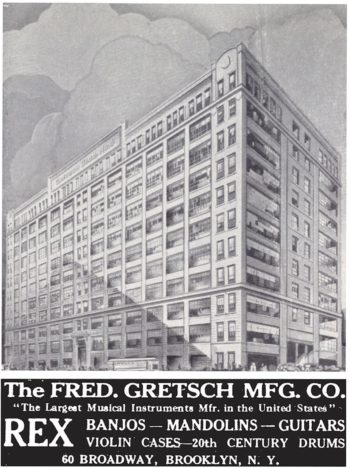 When opened in January 1916, the Gretsch Building contained several floors for the manufacturing of drums and fretted instruments, and even used the roof for tanning sheepskin and calfskin hides for drum heads. The remaining floors were leased to various businesses including Braunworth & Co. Bookbinders and Schaffer and Budenburg, a steam gauge and thermometer manufacturer.

Fred Sr. was also an innovator and always thinking of how to improve and streamline his business. Around 1918, he developing the revolutionary multi-ply drum lamination process. It was a vast improvement over the then-current method of steam-bending solid boards into cylinders to create drum shells.

With his new process, drum building became faster, cheaper, and drum shells were consistently round. His method was soon adopted by other drum manufacturers and, 100 years later, it still remains the standard of the industry today.

Given the fact that Fred Sr. didn’t finish the ninth grade, he was very smart and obviously inherited the entrepreneurial gene and business success skills from his father and mother’s families. The Gretsch Company continued to grow under his leadership and was recognized as the largest musical instruments manufacturer in the United States in 1920. Although the 1920s were mostly filled with success and happiness, tragedy struck Fred Sr. and his three grown sons in 1928. While on a business trip in Europe with oldest son, Fred Jr., Charlotte became seriously ill and died shortly after being diagnosed with ovarian cancer. She was only 47.

During the 1920s, Fred Sr. discovered he had a second business passion: banking. He was able to juggle two careers successfully between the Gretsch Company and Lincoln Savings Bank in Brooklyn. He was elected to the bank’s Finance Committee in 1925, became a Vice President in 1930, and the bank’s president in 1940.

After a 47-year career of guiding the Gretsch Company through unprecedented growth, Fred Sr. retired in 1942 and passed the reins over to his two oldest sons, Fred Gretsch, Jr. and William “Bill” Gretsch. With the successful transition of the family business in place, Fred Sr. continued working at Lincoln Savings Bank and was even elected Chairman of the Board within a few years. 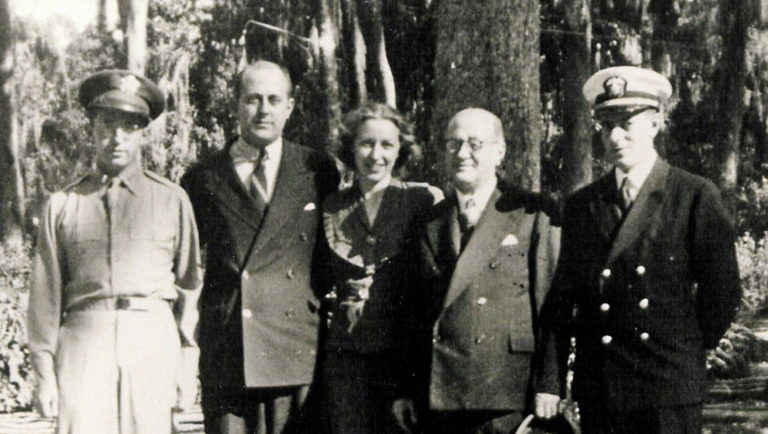 After his son, Bill, passed away from cancer in 1948, Fred Sr. became actively involved in the lives of his young grandchildren. He is remembered for always having candy in his pockets and taking his grandchildren to many pony rides. He was also more than happy to take his grandson (current Gretsch president Fred W. Gretsch) to the Gretsch factory on Saturdays so the young lad could be taught “the Gretsch way” of assembling drum parts. 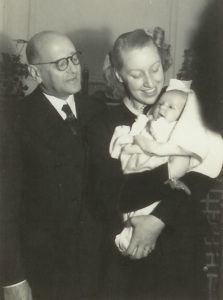 Gretsch introduced their new line of Electromatic hollow body guitars in 1951; the company’s first serious step into the growing popularity of electric guitars. A year later, Fred Gretsch, Sr., who had taken over his father’s small music shop as a teenager and built it into an industry leader, passed away at the age of 72.

It would be his oldest son, Fred Jr., who would build on his father’s success and lead Gretsch into the birth of rock ‘n’ roll and the company’s golden age of the 50s and 60s. “That Great Gretsch Sound” was about to take center stage and get amplified like never before.