Fred #1: Friedrich Gretsch – The “First Fred” Who Started It All.

If you had a time machine and attended any Gretsch family reunion in the past 100 years, you’d probably meet more than one Fred Gretsch. As many of you reading this article know, the name Fred Gretsch is synonymous with the long, storied history of The Gretsch Company. In fact, four of the company’s five presidents over the past 135 years have been known as Fred Gretsch.

Let’s take a look at Fred #1: Friedrich Gretsch, a teenager who came to America with a small suitcase and a big dream, and built the foundation for a business that has lasted 135 years.

Today’s Gretsch Company can be traced back to Friedrich William Gretsch (also called Fritz and later, Fred), the 16-year-old “First Fred” who emigrated from Mannheim, Germany to America in 1873.

The oldest of nine children of William and Anna Gretsch, the name Friedrich went back several generations on his mother’s side but not in the Gretsch family (William was the most common name on his father’s side.)

It’s safe to say that Friedrich inherited the entrepreneurial gene from both parents. His father supported his large family by owning a successful general store in Mannheim. His mother had several brothers who had emigrated to California and set up businesses that included a general store, a distillery, and a hotel. One can imagine Friedrich growing up in the family’s business and helping his father run the general store. This early exposure to the retail business world would pay dividends for Friedrich down the road.

Like several family members before him, Friedrich left Germany for the opportunities and dreams America had to offer in the 1870s. The teenager boarded the Vandalia steamship for New York City and lived with his uncle and cousins. He worked briefly at his older brother’s wine merchant business before making a very important career change. Friedrich accepted a job with Albert Houdlett and Sons, a well-respected Brooklyn drum and banjo manufacturing company, and apprenticed there for almost a decade.

By 1883, the 27-year-old Friedrich had learned the music business and was ready to continue his family’s entrepreneurial spirit. With the encouragement of his wife Rosa, who loved music and was an accomplished piano player, he opened a small musical instrument manufacturing shop in Brooklyn making drums, banjos, and tambourines for such wholesalers as Bruno, Wurlitzer, and Carl Fischer.

A handwritten business letter from 1887 shows Friedrich had already Americanized his first name to Fred. The letterhead reads, “Office of Fred Gretsch, Manufacturer of Drums, Banjos, Tambourines, Trimmings, and General Brass Finishing.”  The address is listed as 132 & 134 First St., One block from the Ferry, Brooklyn, E.D., N.Y.  He also signed the letter as Fred Gretsch.

For a dozen years, the Fred Gretsch Manufacturing Company successfully built high-quality instruments and, because of their location near the docks, also enjoyed a profitable import business from Europe.

Friedrich also understood business diversification and the value of real estate. He smartly purchased a number of investment properties near his shop and several lots where the footings of the soon-to-be-built Williamsburg Bridge would be constructed.

On April 11, 1895, Friedrich boarded the Furest Bismark steamship and made his first return to Germany to visit family and explore further instrument exporting opportunities. Friedrich’s brother, William, met him in Hamburg, but within days Friedrich became ill from the cholera pandemic and died on April 28.

The shocking news was devastating to the Gretsch family. Friedrich was only 39 years old and left behind a small, but growing business with 12 workers, and a wife with seven children. Fortunately, Rosa wasn’t an ordinary widow and his oldest son, Fred Sr., wasn’t an ordinary 15-year-old. Working together, Rosa and Fred Sr. boldly transformed the small Fred Gretsch Manufacturing Company into one of the largest musical instruments manufacturers in America. 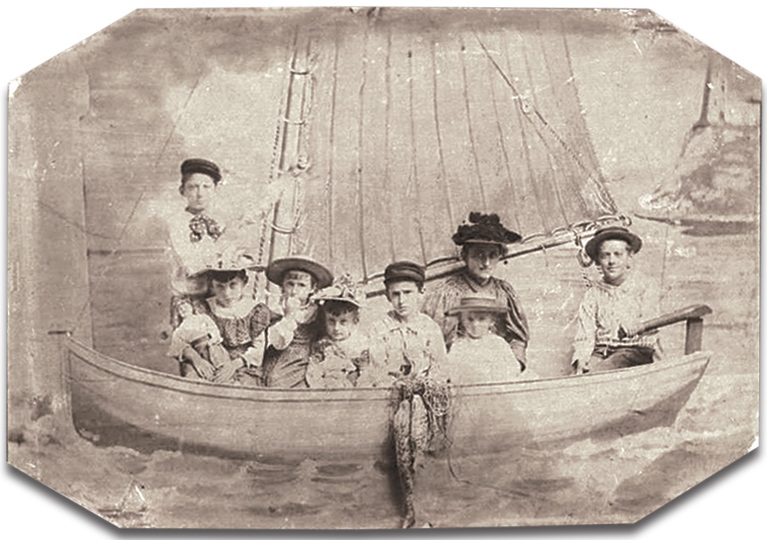 Friedrich (like all of the Four Freds) was not musically inclined. However, his wife, Rosa was an accomplished and talented piano player. Her most prized possession was a Steinway and Sons grand piano.

Fred #2: Fred Gretsch, Sr. – The Visionary, Teenage CEO. The oldest child of Friedrich and Rosa Gretsch (and the first to be officially named Fred).