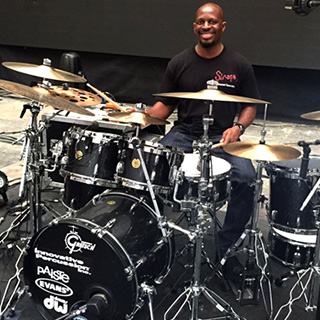 Nathaniel Townsley is a relatively new Gretsch Drums artist, having joined the roster in 2016. But he’s certainly not new to the drumming scene. In fact, Nathaniel has earned a reputation as a “quiet giant” among knowledgeable drummers who’ve followed his amazing career over the past two decades.

Like so many drummers of his generation, Nathaniel’s career began in church—his father’s church, as a matter of fact. Playing drums to gospel music from the age of three gave him a spiritual and a musical foundation—as well as an unshakeable sense of groove. As he grew and gained more experience, he also developed astounding technique and versatility, due largely to the diverse influences of drummers like Buddy Rich, Steve Gadd, Joel Smith, Will Kennedy, Bill Maxwell, and Dave Weckl. This versatility, in turn, has made Nathaniel a first-call drummer for a wide-ranging roster of artists. He’s recorded and/or toured with musical legends Stevie Wonder, Mariah Carey, and Nile Rogers, along with other stars including Corey Glover, Special EFX, Chris DeBarge, R. Kelly, Dru Hill, Public Enemy, and Lalah Hathaway. 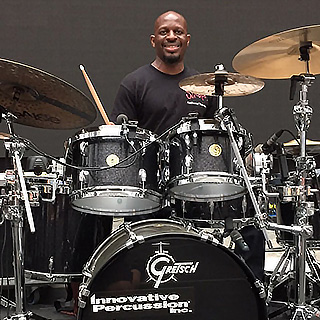 While doing all of this, Nathaniel established himself as a drum clinician and educator. His appearance at the 2003 Modern Drummer Festival is still spoken of today by the 1,000 drummers who were lucky enough to see him in person. He also wowed the audience at the Montreal Drum Fest audience two years later, and he’s been conducting workshops around the world ever since.

Nathaniel gained international prominence when he was tapped by Weather Report founder Joe Zawinul to anchor the musical pioneer’s later band, the Zawinul Syndicate. Joe recognized the young drummer’s ability to groove and to burn—and to do everything in between. Nathaniel played with the Syndicate from 2002 until Joe’s passing in 2007. 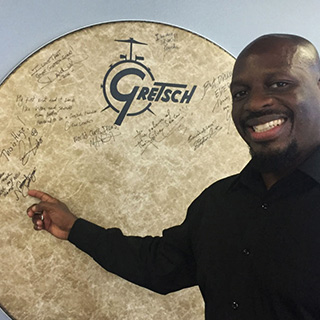 In the years since then, Nathaniel has continued to work with major artists around the world, including his current primary gig with Grammy-winning Spanish superstar Alejandro Sanz. And he frequently returns to his roots in the Gospel world, recording with leading Gospel figures like Donnie McClurkin, Rev. Timothy Wright, and Tramaine Hawkins. And Nathaniel’s 2007 recording with his own trio, titled The Big Idea, is an absolute gem that showcases his talents as a drummer, composer, and bandleader. (Check it out at https://www.youtube.com/watch?v=s1-J0CoUTNE.)

Blessed with a musical passion that’s balanced by a humble and sincere personality, Nathaniel Townsley is still a quiet giant—one who lets his playing do all the talking. And with that playing, he has a lot to say.

Here’s Nathaniel on a live show with singer Kennedy and her band, The Kennedy Administration, at The Groove in New York City, in January of 2017.

While on the most recent Alejandro Sanz world tour, Nathaniel conducted a master class at Inca Drums in Lima, Peru.