Matty Amendola is one of the newest and youngest members on the roster of Gretsch drum artists. But though he’s only in his mid-20s, he comes to that roster as a veteran who’s been playing behind a kit almost since before he could walk. (Matty is the son of Billy Amendola, who drummed for the 1970’s pop/disco band Mantus, and whose studio playing on then teen-sensation Debbie Gibson’s hits “Only In My Dreams” and “Shake Your Love” earned him a triple-platinum record award.)

Today, Matty is a multi-threat artist. In addition to his drumming skills, he’s a talented guitarist and bass player, a record producer, and a skilled audio engineer. And you can add to that list the role of highly motivational educator, eager to share his knowledge and experience.

Considering that Matty is a cutting-edge artist, it’s not surprising that he’s been using cutting-edge media as his educational platform.

Most recently he’s done a series of video tutorials for the audio engineering web site Sonicscoop. In that five-part series—titled “Making The Mix”—Matty details exactly how he produced and mixed the latest single (titled “Blah Blah Blah”) by 13-year-old pop phenom Juliana Wilson. (Check out Matty’s videos at Sonicscoop.com.)

The Sonicscoop video tutorials were recorded at Matty’s own 825 Records facility. Founded in 2008, it houses the 825 Records studio, a video suite, and an apartment for out-of-town artists. “It’s a company that’s based on artist development,” he says, “but the studio is an integral part of that.”

When asked what his tutorials can offer to drummers who aren’t audio engineers or producers like him, Matty replies, “There are parts of my mix series where I describe the why of certain things. Something that has always steered me away from taking formal lessons is that they often teach people how to do things, before they teach why you should do them. So I spoke a lot about why some of the drum parts were being chosen before I explained how I did them.

“For instance, when I was compiling the electronic drums, I knew that there were also going to be live drums on the track. I tried to explain how this electronic kick might seem a little weird here, and that snare drum might seem a little sporadic there, but I knew in the back of my mind that there was going to be a live groove there. Those parts have to be complementary; they can’t be fighting each other.

“One particular thing that I thought drummers were really going to dig—and they did—was that there are a lot of parts in the song where I put the drums in reverse. That’s a huge trick that I use on pop records. As a drummer myself, I’m naturally into putting live drums on as many records as I can. But that’s not really all “in style” these days. So what I do is subliminally let someone’s ear get accustomed to the sound of live drums before they kick in. I explain in the video that you can’t get behind the kit and start smashing away if you’re going to put things in reverse. You really have to start thinking, ‘Okay, did I hit this accent before? Was there a sixteenth note here?’ And then go against that, knowing that when you put it in reverse the parts are going to work together.”

That’s assuming, though, that the drummer is also going to be the audio engineer/producer. Matty usually is…but what about drummers who aren’t?

“Well,” he replies, “I actually brought up in the video that drummers shouldn’t be afraid to contribute ideas. If you’re in the studio and you think you can hit this trick, ask the producer to give you a pass—when you’re done doing what they ask you to do—and say, ‘Hey, do you mind throwing that in reverse real quick?’ Drummers shouldn’t be afraid to go for things like that. Now, obviously you have to know your place on a session. Sometimes the producer doesn’t want any creative input from the musicians. But nine times out of ten they’re hiring you because they do want a little bit of that.”

Speaking not only as an audio engineer and producer, but also as a skilled live and studio musician, Matty reflects on how things have changed in recording world since the heyday of the great studio players. 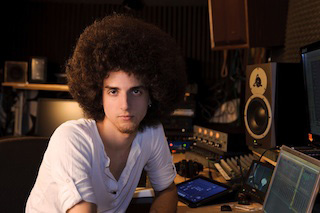 “Actually,” he begins, “it’s changed dramatically just since I started doing it. Let me back up a bit and say that I learned myself by watching, and by being lucky enough to be exposed to things at an early age—and then eventually to actually get involved in those things. With drums, it was my dad putting me in a high chair to watch him, and then behind drums to play them. In the studio it was [New York studio legend] Butch Jones bringing me into multi-million-dollar studios on sessions where I just sat back and kept my mouth shut and absorbed as much as I could.

“Unfortunately, the community thing that I benefited from isn’t as strong as it used to be. Back in the day you were able to just walk in, watch one of your favorite drummers playing on a track for two minutes, and pick up invaluable information. That can’t be done anymore.

“That’s one of the reasons I love doing these tutorial videos,” Matty continues. “Video clips can give people a glimpse into what they no longer can see on their own. 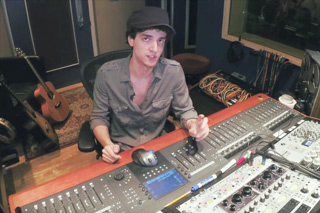 Which begs the question: Will Matty be doing more video tutorials? To which he replies, “Well, instead of doing these giant tutorial projects, I’ve recently been trying to steer people towards my Instagram page [@mattyamendola]. I’m in the studio six days a week, working with different people. This always generates really cool little nuggets of information about things we’re doing—like miking an amplifier with a telephone. As another example, a company called Big Fat Snare Drum has been making all these new audio accessories, like tambourines and stuff. I’ve been putting them all over the drums in places you wouldn’t expect. I’m happy to go on Instagram and tell people about these things, just saying ‘Check this out,’ or ‘Try it this way instead of that way.’”

Matty concludes with what he calls a “fun fact,” saying, “My first job ever was teaching drummers. It was at Street Sounds [music store] in Brooklyn, where the annual Gretsch Day has been held for the past several years. Sharing information with other drummers has always been a thing I really enjoy doing. What form that will take in the future, and via what outlet, is yet to be determined. But my educational efforts will definitely continue.”

In this video, Matty focuses on live drums and getting a huge drum sound.  You’ll hear his Gretsch Brooklyn kit in action!